You knew of the abuse

and you chose to do nothing.

You did not protect your child. 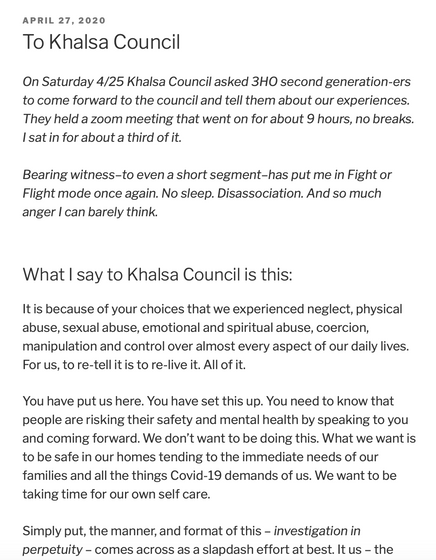 Since the beginning of 2020, many survivors found support and listening ears in this closed facebook group

and others that were created meanwhile.

Dev Dharm Khalsa (Feb 2021): There is a huge lack of critical thinking in the 3HO community.

More about his story on the 2nd Gen page.

HarGobind talks in Dec 2020 with GuruNischan about how he dealt with all what happened since the beginning of 2020.

His choice is to deconstruct,

not to let things explode.

More about his story on the 2nd Gen page.

GuruNischan talks in Apr 2021 about

what happened to her after the book of

We're all in this together.

Let's make a new story for ourselves

More about Meeri's story on

Why not call Kundalini Yoga as taught by Yogi Bhajan

Because that is what it is, right? A yoga form created by Yogi Bhajan. Let the name reflect the source.

If you want to be transparant to newcomers, it is the most honest thing you can do.

This yoga has little in common with the much older Kundalini Yoga that is described in the Tantra's.

Long time ago Philip Deslippe showed us the different ingredients that Yogi Bhajan used to build his yoga.

What we know for sure is that Kundalini Yoga as described in the Tantras is not the most visible part of the mixture he produced.

So calling it Kundalini Yoga is only adding up to confusion, and that is not what we want to do, right?