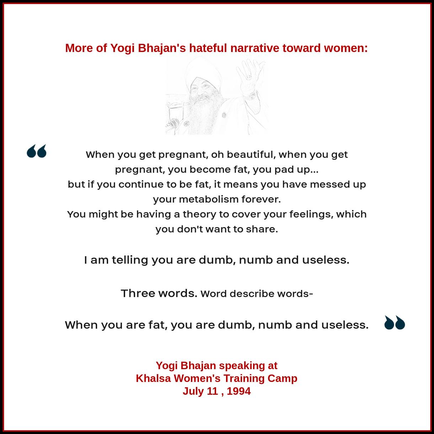 While Yogi Bhajan urged women to be skinny,

he himself was far overweight.

him one day to go on a diet.

Link to this story.

How slanderous stories were made up by

Yogi Bhahan and his entourage.

in front of her eyes.

Read her testimonial below.

When you are fat,

you are dumb, numb and useless.

… Short intro for those who did not read Marina’s full story: Yogi Bhajan married Marina to his spiritual son Dharma. Marina just moved from Italy to Espanola and discovered the strange way of life at YB’s court …

The construction of the lesbian image of Dharma's ex-wife is an interesting process to explain. I saw it happening with her and saw it repeated on many other occasions. But in this case, I was on top of it, so I can tell you exactly how it went. Because I was very new to everything, Hari Nam K, the day-time secretary of Yogi Bhajan, was always requested to repeat to me in simple and slow words, what was being said. They wanted to make sure I fully understood what was being discussed. It was extremely confusing to me, as I was still under the impression that YB was a good person. Often I thought: ‘This is not possible. I probably still misunderstand.’ But no, the terrible thing they did to Dharma’s ex-wife was true. Little did I know then, that on one day "the drama of infamy and expulsion" would be about me.

When someone had fallen from grace or had left the community, events and circumstances that had never occurred in real life were invented and shaped out of nothing. It was an established and habitual practice in that living room of YB. The same thing happened during the witch hunts in the time of the Inquisition. When such scenarios were being created, most of the time I thought I had misunderstood what was being said as it was so weird, so far-fetched. There was always someone, sometimes YB himself, who would repeat the concept to me again in more and other words, to make sure I got it. On such occasions, YB would nail me down with his eyes to seal my assent and my silence.

The first time the ex-wife of my husband was mentioned was in the car. YB threw it out there: "This woman is a lesbian". Hari Nam K or Peraim K downplayed it: "Come on Sir, what are you saying?" YB insisted: "So what do you think is the reason that she left him?" And Dharma said: "You're possibly right Sir". When I heard this, I told myself that for sure I had misunderstood, because these were assumptions and YB would never go so low to speak ill of someone.

The lesbian story got a sequel in the living room of the ranch. There it became the official truth. YB threw the question to the group again. What could possibly be the reason why that woman (he didn't call her by her name) had left a husband like Dharma? Why would she leave a house like that, a prosperous life like Dharma had offered her, and such a high social position? Now, she had nothing. And lucky for me, I had everything now. At that point YB remained silent.

Someone said that she was indeed a strange woman. Someone else said she was childish. Another person intervened to say that she always and almost exclusively saw her with other women, with this or that girl. You know, she had had the impression that the ex-wife of Dharma was or had become a lesbian. But you could also see that she was a slut. Maybe she was not a lesbian, but she was a slut. ‘No,’ Dharma intervened, she was not very interested in sex, at least not with him. Hari Jiwan confirmed the thesis of the lesbian. He had always known. Some of the ladies tried to minimise what was being said, saying that they were exaggerating. Anyway: "good for you”, they said while they turned to me, “you got the guy". I was the lucky one who won the lottery.

So, this is how my husband's ex became a lesbian. She was called ugly, old and fat. Nobody ever considered that Dharma was a bad fuck, an arid, unaffectionate and selfish man. When my turn came, three years later, I would be called a filthy, lousy, dirty, farting, nymphomaniac slut.

Back to Other Transgressions 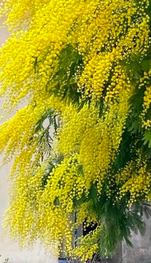 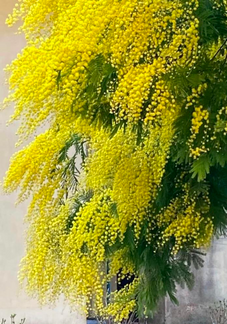 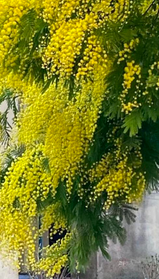