'More likely than not'

Bhajan used his power as a spiritual leader to perpetrate

a range of abuses against women and female minors 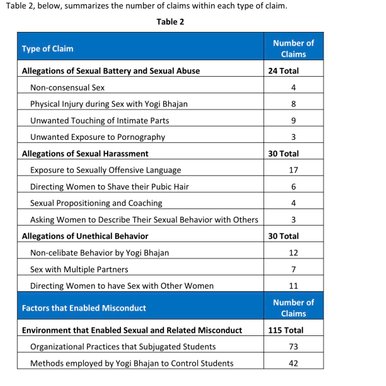 After the release of Premka many survivors had come forward.

In March 2020 the SSSC, the Siri Singh Sahib Cooperation, the umbrella organisation overseeing all profits and non-profits created by Yogi Bhajan, could no longer deny the growing number of allegations against their spiritual leader.

They ordered an independent report with An Olive Branch, a Buddhist-inspired group specialising in guiding spiritual organisations in investigating ethical issues.

The 76 page report is far from an easy read. The details of the extremely brutal acts of sexual abuse that came forward need a trigger warning for survivors as these can be retraumatising.

Almost 300 people contacted An Olive Branch or were contacted by them for this report. Both supporters of YB and reporters of harm testified.

The report divided the community. Some teachers and trainers have disconnected themselves from the community and the organisations. They have either stopped practising or teaching Kundalini Yoga as taught by Yogi Bhajan, or they have chosen to become independent of the organisations. YouTube videos show how KY manuals and books are set on fire.

Devotees of YB still worship him and continue to defend their spiritual teacher. They asked for a professional review of the AOB report that resulted in the Thompson report that tries to discredit the work of An Olive Branch with technical arguments.

Back to Sexual Abuse