that was known of but denied by the community.

Guru Amrit Kaur, one of the secretaries of Yogi Bhajan.

Her horrific story can be read from the notes from the court case she filed in 1986. Below you can find an extract of the paragraphs relating to the sexual abuse. It includes her being raped by YB while her sister was holding her down.

In 1985 Kate Felt succeeded in escaping from the 3HO community and started a court case against YB, his organisations and a number of its leaders including her sister.

Her sister Guru Amrit Kaur has been the de facto leader of 3HO since Yogi Bhajan's death, gaining the title Sardarni Sikdar Sahiba Sardarni Guru Amrit Kaur. From SSSC website: "In 2004, at the Siri Singh Sahib’s passing he bestowed upon her the privilege to serve the Sangat as a spiritual guide to bring all to the feet of the Guru."

When the revelations came out, Guru Amrit Kaur took a leave of absense and has not made any comments on what has been discovered.

Yogi Bhajan talking about this lawsuit

Link to lecture on Library of Teachings

we were prevented from critical thinking.

GuruNischan tells us about how she remembers Kate Felt who had been horribly and abusively raped by Yogi Bhajan ...

In his interview with GuruNischan°, Tej Steiner explains how Kate's story landed with him.

More about the story of Tej Steiner.

In 1986, Dr Ron Alexander was asked by Pamela and Kate's attorneys to give a psychological evaluation of them.

More about the story of Dr Ron Alexander. 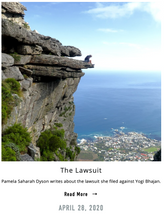 Pamela Dyson filed a lawsuit at the same time as Kate Felt did in 1986.

Back to Sexual Abuse
Back to Top

Extract from the Lawsuit of Kate Felt 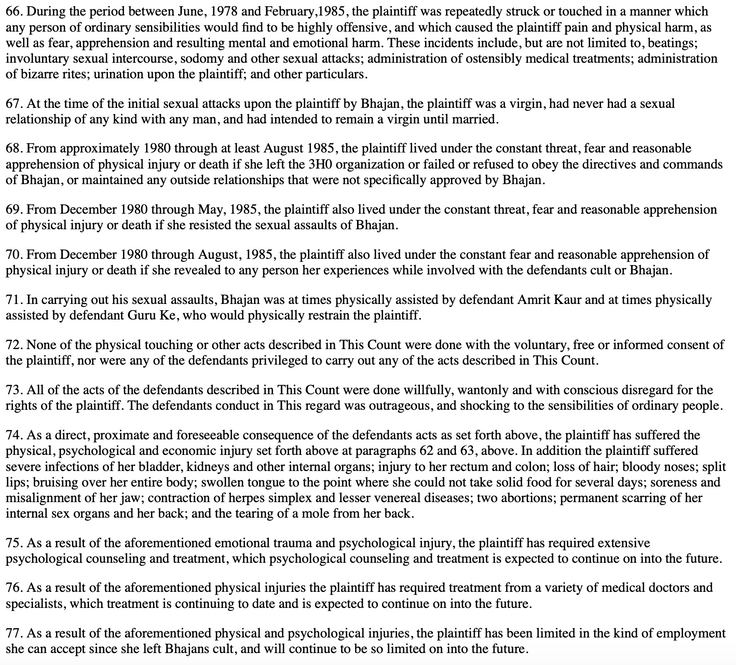